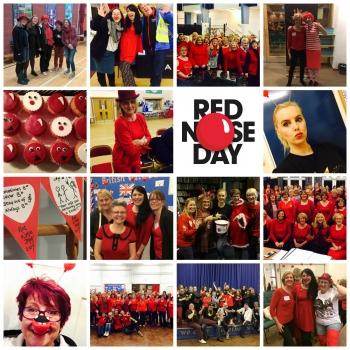 ‘Got 2 Sing’ entered into the spirit of Comic Relief and helped to raise £893 in the process!

Choir members from Got 2 Sing not only donned red noses but also red t-shirts, jumpers and dresses….including the male members!

But it was the ‘Got 2 Sing Youth Choir’, made up of 9 – 16 year olds, who made the biggest impression by putting on a show for the adult members with their rendition of “One Way or Another/Teenage Kicks” joined by several male members masquerading as ‘One Direction!’

The fun night of fundraising fell in the middle of choir rehearsals for Got 2 Sing’s Symphony Hall Concert this September, themed ‘One Voice’, where over 500 members will take to the stage.

Each of the ten Got 2 Sing choirs which span the West Midlands, Worcestershire, Shropshire, Herefordshire and Gloucestershire did their ‘own thing’ to help raise the money last week.

Beth Dunn, founder and director of ‘Got 2 Sing’ commented, “Red Nose Day as it is famously known gives us a wonderful opportunity to have great fun and raise funds for this amazing charity. It’s good to know we have played a part in funding some incredible projects, in the UK and Africa to tackle projects which address poverty and injustice.”