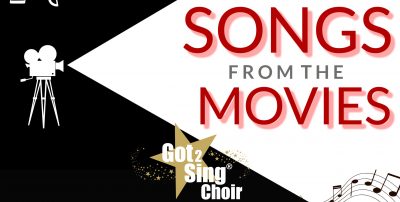 Lights! Camera! Action!
Got 2 Sing Choir presents… Karaoke G2S Style: Songs From The Movies Session
After the success of our first Karaoke night, we would love you to join us on Zoom for another evening of group karaoke, Got 2 Sing Style!
Keeping you singing throughout the holidays.
Head to your Members’ Area to vote for the songs that will feature on the night and get ready to belt out your favourite songs from movies with your choir buddies.
You might even feel like dressing up as your favourite film character or movie star! Go for it!
Zoom link via your Members’ Area.

Join us on Zoom for an evening of group karaoke, Got 2 Sing Style!

Grab your disco ball, throw on your flares, sprinkle liberally with sequins and get ready to belt out your favourite disco classics with your choir buddies.

Head to your Members’ Area to vote for the songs that will feature on the night!

Zoom link via your Members’ Area. 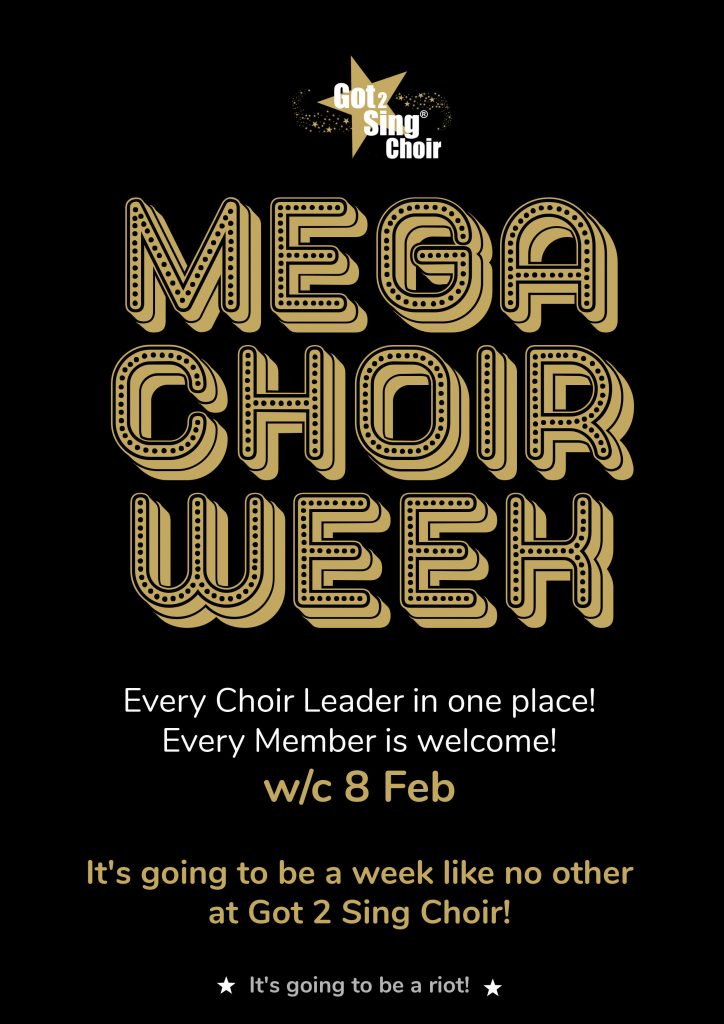 Join us for Mega Choir Week w/c 8th February! Each choir night, the Choir Leaders will assemble (abit like The Avengers!) on one Zoom session with every Member welcome! Your Zoom links will be available as normal but get ready for choir chaos and plenty of fun! 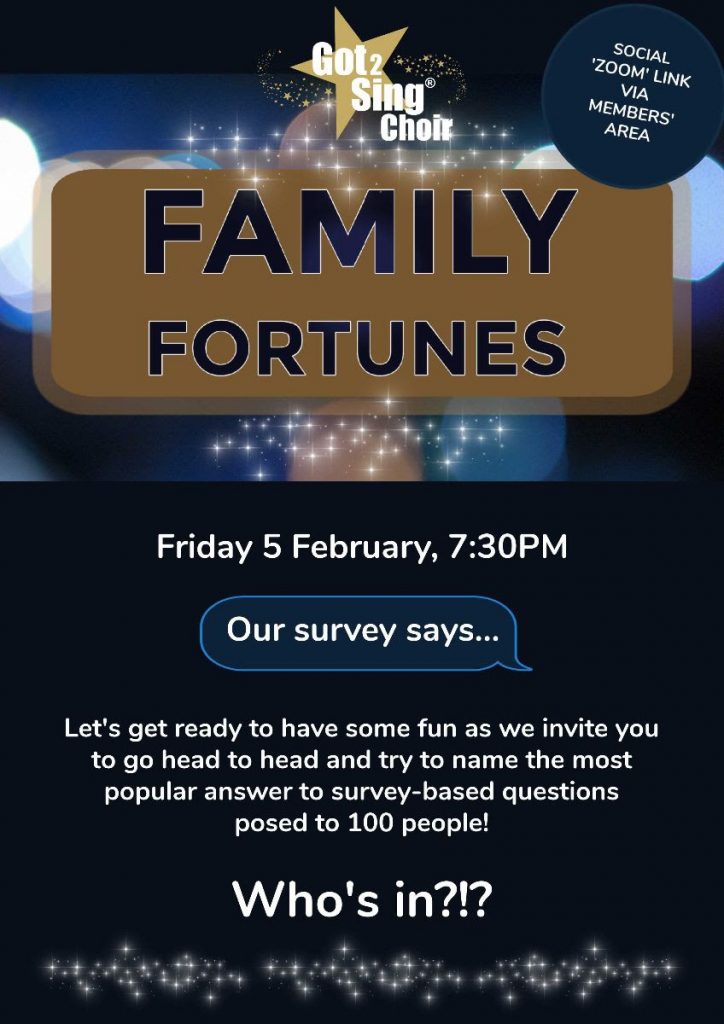 Let’s get ready to have some fun as we go head to head and try to name the most popular answer to survey-based questions.

Open to Members with the Zoom link available via your Members’ Area.

Why not get your family involved too for a quiz that is suitable for all ages! 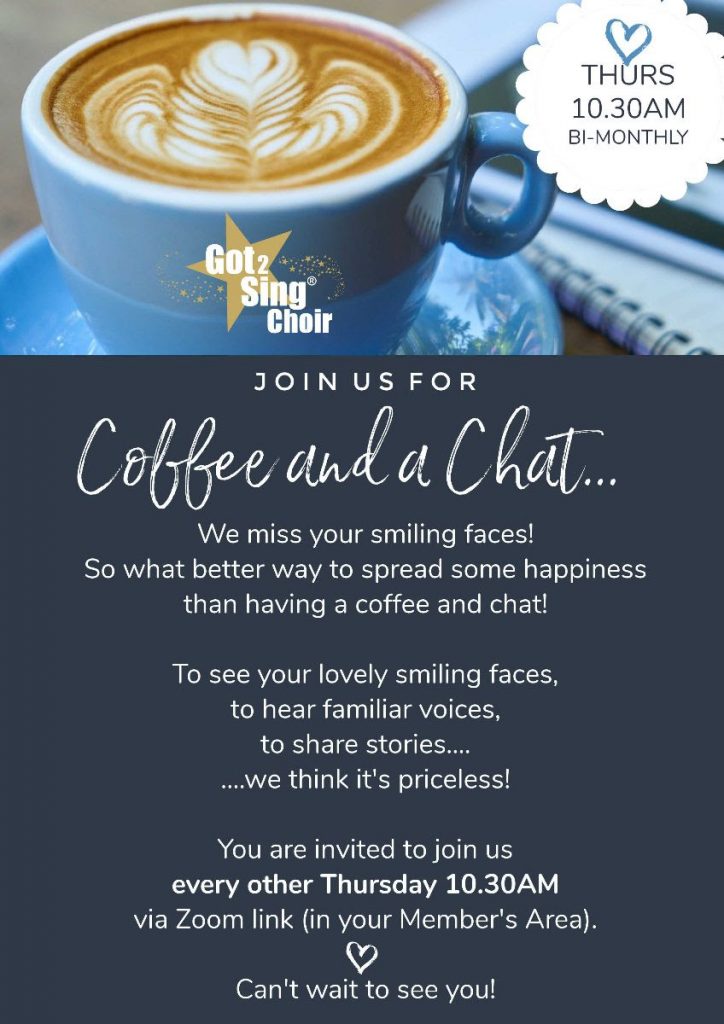 Join us for a Coffee and a Chat, every other Thursday throughout January. A lovely opportunity to have a chin-wag with your choir buddies and say hello to people from all choirs! Put the kettle on and let’s put the world to rights!

Join us for a Coffee and a Chat, every other Thursday throughout January. A lovely opportunity to have a chin-wag with your choir buddies and say hello to people from all choirs! Put the kettle on and let’s put the world to rights! 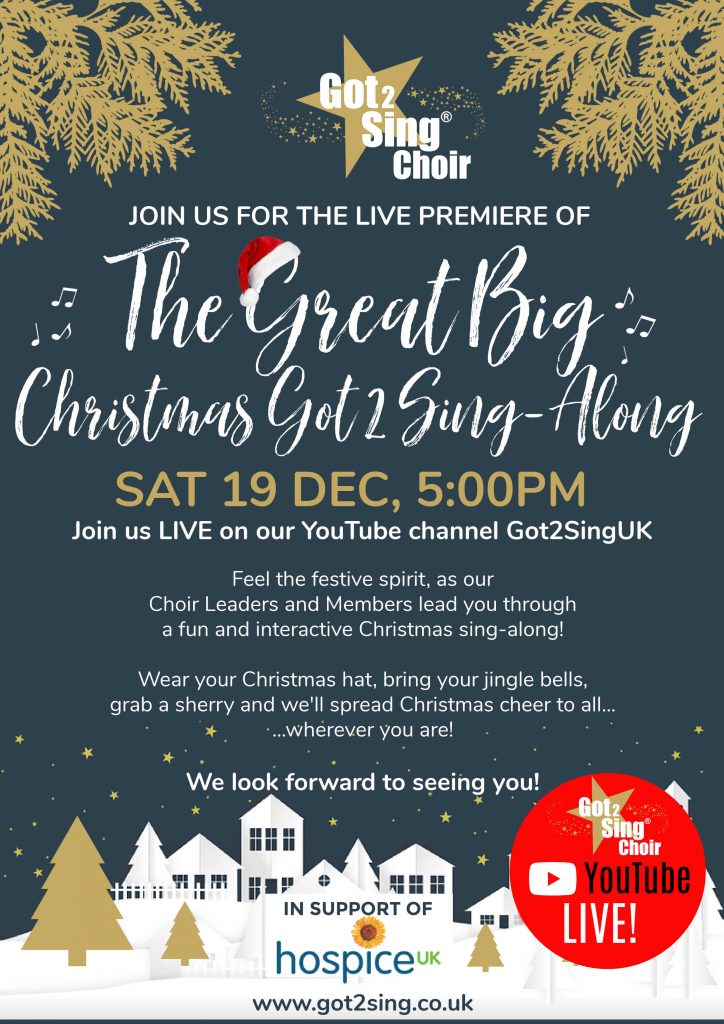 Join us for the live premiere of The Great Big Christmas Got 2 Sing – Along in support of Hospice UK.
On Saturday 19 December at 5:00pm, click here and feel the festive spirit. Join our Got 2 Sing Choir Leaders and Members for a fun and interactive Christmas sing-along!
Wear your Christmas hat, bring your jingle bells, grab a sherry and we’ll spread Christmas cheer to all… wherever you are!
We look forward to seeing you 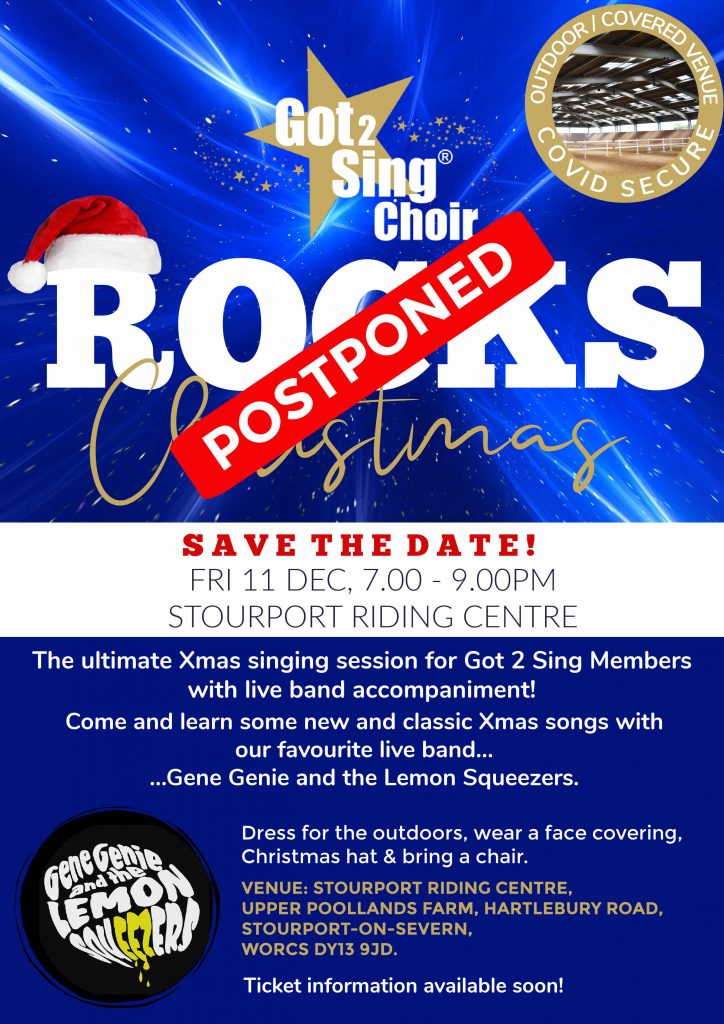 Due to the latest government travel restrictions we have postponed this event!

SAVE THE DATE! Friday 11th December

Come and learn some new and classic xmas songs with our favourite band… Gene Genie & the Lemon Squeezers.

Ticket information will be available via your member’s area soon!!! 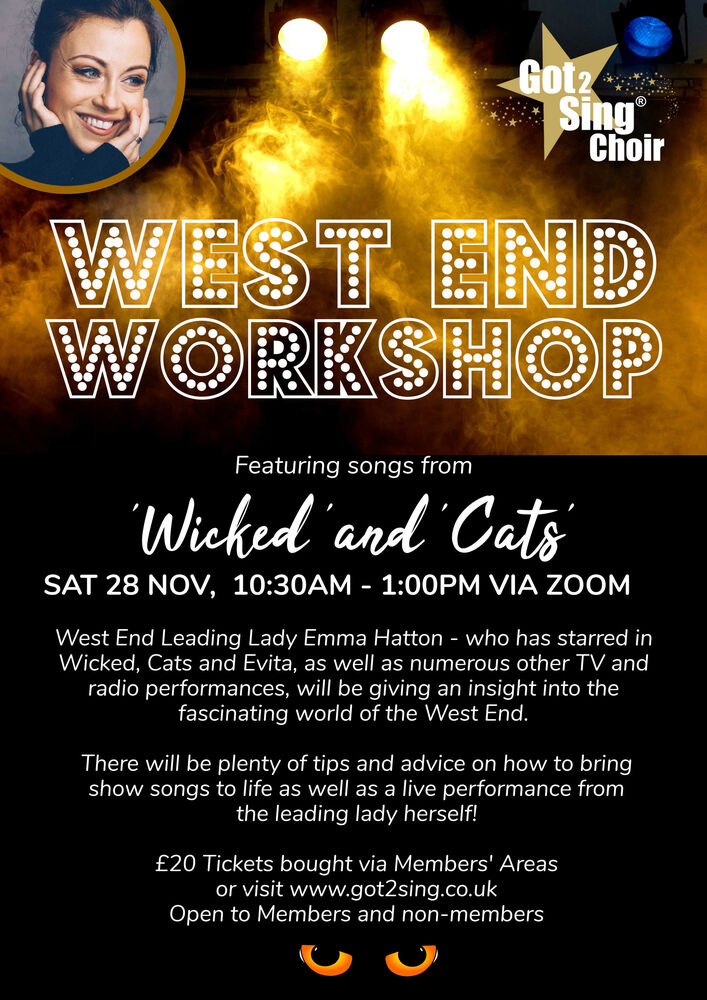 Emma Hatton has amassed a huge fan base in the world of stage, having starred in the West End as Eva Peron in Evita, Elphaba in Wicked and Scaramouche in We Will Rock You. She performed the lead role of Grizabella in Kilworth House Theatre’s revival of ‘Cats’. Her reputation as a Leading Lady has led to invitations to appear on This Morning – during which she both performed Defying Gravity and collected the Olivier Award on behalf of Wicked – and the Andrew Marr Show. On radio, Emma has been a guest artist on BBC Radio 4 Woman’s Hour, BBC Radio 2 Live and the Elaine Paige Show. In 2018, she had the honour of being chosen to perform as Eva Peron in the BBC documentary celebrating 40 years of Evita.

Emma is so excited to be working alongside Got 2 Sing Choir to produce this exciting workshop. Attendees will get an insight into the fascinating world of the West End with plenty of tips and advice on how to bring show songs to life as well as a live performance from the leading lady herself.

Songs featured from Wicked and Cats. 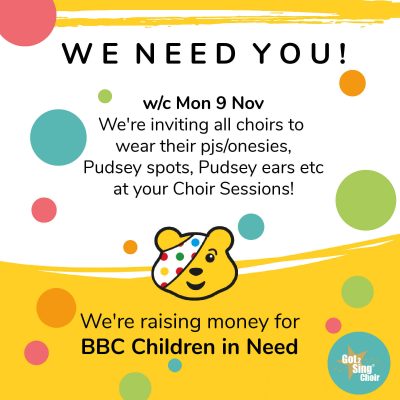 It’s time to get fundraising so that together, we can change young lives right across the UK by supporting this amazing charity.
This year, Got 2 Sing Choir is inviting it’s wonderful members to don their comfiest pjs or onesy or wear their spottiest outfit and of course some pudsey ears for their choir session the week commencing 9th November.
Let’s have a fantastic evening of singing and fun whilst raising money for BBC Children In Need.
Talking of raising money…
Click here to donate:
https://donate.bbcchildreninneed.co.uk/
Thank you! 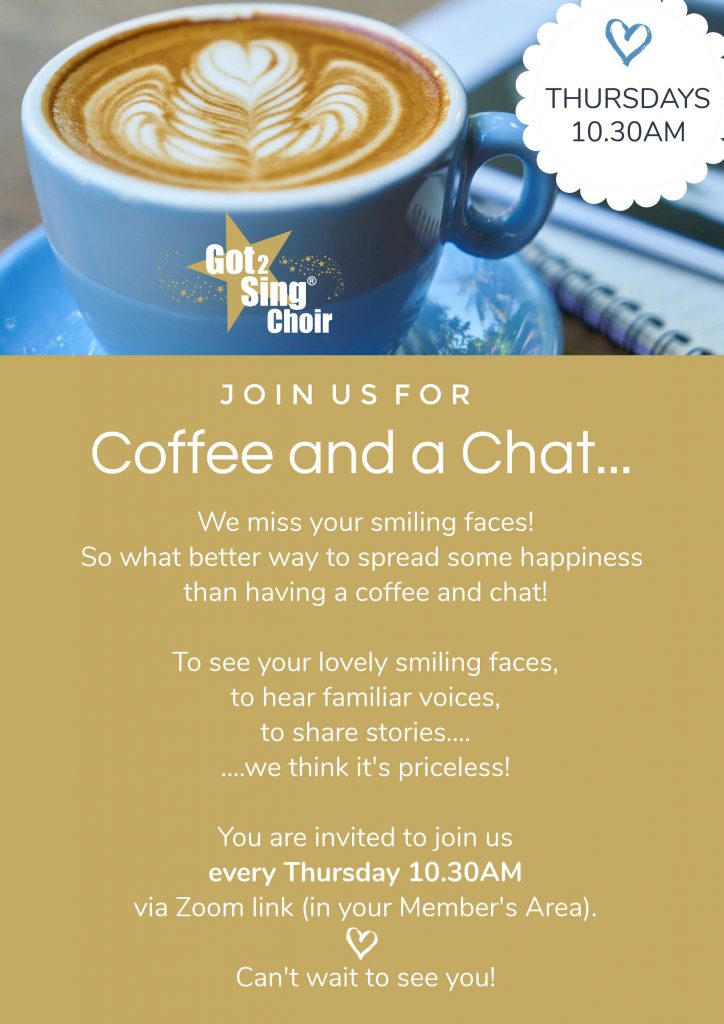 Join us for a Coffee and a Chat, every Thursday throughout November.

A lovely opportunity to have a chin-wag with your choir buddies and say hello to people from all choirs!

Put the kettle on and let’s put the world to rights! 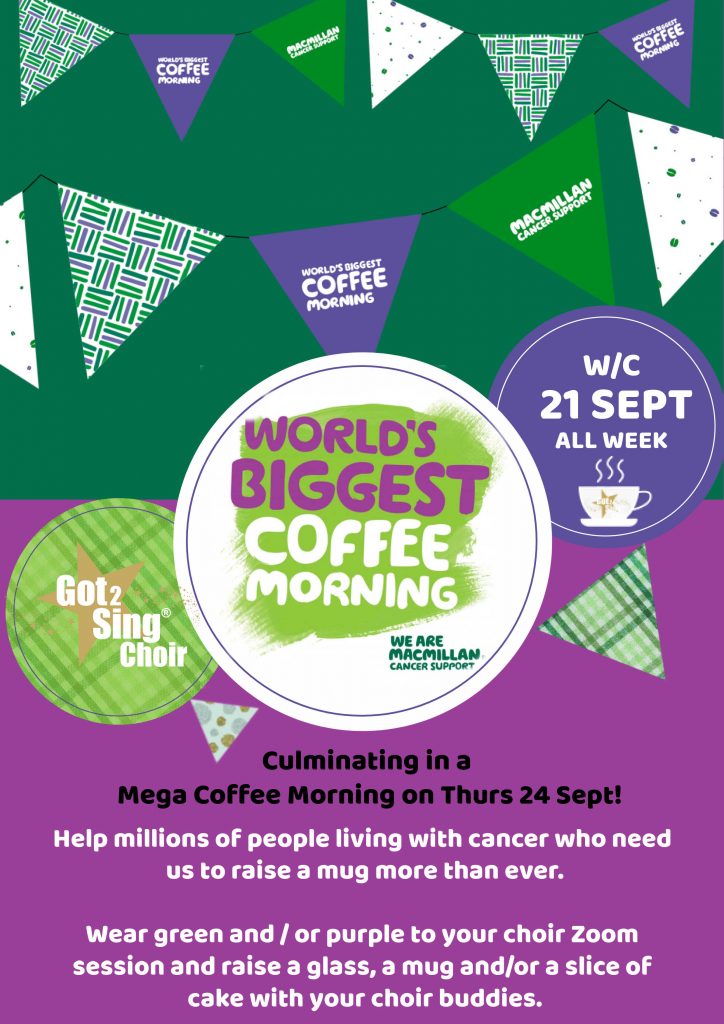 Help millions of people living with cancer who need us to raise a mug more than ever.

At the end of your choir session, week commencing 21 September, raise a glass, a mug and/a a slice of cake with your choir buddies.

Join us for a Mega Coffee Morning on Thursday 24 September and show off your finest baked creations (feel free to fake it and buy something delicious!).

Donations to Macmillan Cancer Support can be made during that week on our main Facebook page.